We can download and review the source code of the app.

By reading /challenge/routes/index.js we can find the routes of the app.

The two routes that are interesting are the following:

Also the following chunk of code in /challenge/bot.js allow us to understand that a bot will consult the queries page.

We can't browse the /queries endpoint directly because it can be viewed only from localhost. So we have to submit a query to the API and wait for the bot to browse it. We see that the bot as a cookie containing the flag so our goal will be to steal that cookie.

This JavaScript payload will retrieve unprotected cookies and make a request to an attacker controlled endpoint to exfiltrate the cookie.

It looks like RSA parameters and cipher text encoded in hexadecimal.

We can convert the hexadecimal to decimal with ctf-party. For example:

It's a network forensics challenge where we'll have to analyse the captured traffic recorded in a pcap.

We can filtrer on HTTP frames or use the Export HTTP object feature.

A webshell named bg.php is access several times and the attacker is sending commands to it.

One of the commands seems obfuscated, but ctf-party can once again help us to decode the URL components and base64 decode it.

Just tracing the syscall made when connecting to a remote socket we can make the flag leak:

While unauthenticated we can only access a authentication form. We'll have to analyse the source code to identify an entry point.

In challenge/database.sql we can understand the database structure and where we'll have to look to find the flag.

Let's look how the queries to the database are crafted in challenge/database.js:

listToys() will list the toys but only the approved ones and the flag is the only one that is not approved. loginUser() and getUser() are unsafe because they are conncatenating user input directly to the query so we'll be able to perform a SQL injection.

But by reading the routes in challenge/routes/index.js, we can see that if we are connected as admin, listToys() argument approved will be overriden with 0 value so it will list unapproved toys including the flag.

Since the login request is vulnerable to SQLi, we are able to log in as admin just by using the following credentials:

We know that the source file is a PDF. There are very few combinations possible (255*255 maximum, or 255*128 keeping only the values when a is coprime with the modulus).

So what we can do is take the magic bytes (signature) of a PDF (5 bytes) and brute-force all values of a and b until we end back on the sames bytes as the encrypted document.

Doing so I retrieved the value of a and b used to encrypt the file:

But after that I was unable to decrypt the file.

Let's see with Volatility3 if there are suspicious commands.

So here we have the full URL of the malware and the PID of the powershell (2700).

Let's list processes to see it's parents and childs.

We know the downloaded powershell script is about update so let's find a file related to update.

So it seems the powershell backdoor was launched by a malicious website with ActiveX. So the parent process 3720 was likely a web browser.

If we look at network connections we can see there are no foreign addresses associated with powershell.exe process or its childs.

Also if we resolve the domain of the malicious URL we can see there are connections to 172.67.177.22 which is normal since the powershell script was downloaded from there.

The expected flag format is the following:

So wrapping up all we got so far, I expected the flag to be the md5 hash of one of the first two payload below but it's not, so I tested also a bunch of other.

In the end I didn't managed to get the flag.

A quick strings on the binaries shows it is packed with UPX. 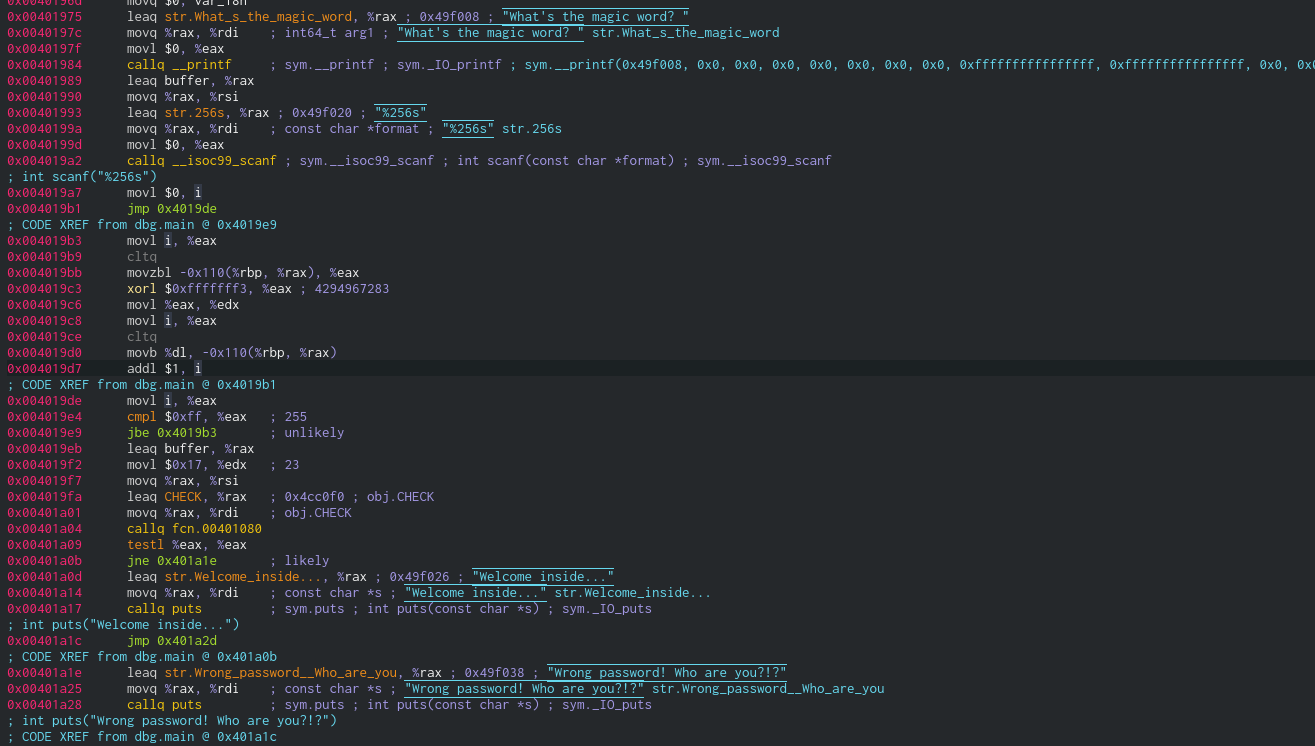 The macro view is that we are asked an input, this input is xored with 0xf3, then an obfuscated function (fcn.00401080) is called with 3 arguments: 0x17, our xored input and and object called CHECK that is likely the xored right value of the flag, then there is a comparison to check if the transformed input match the flag and print a message accordingly.

It's a bit clearer when displayed as a conditional graph. 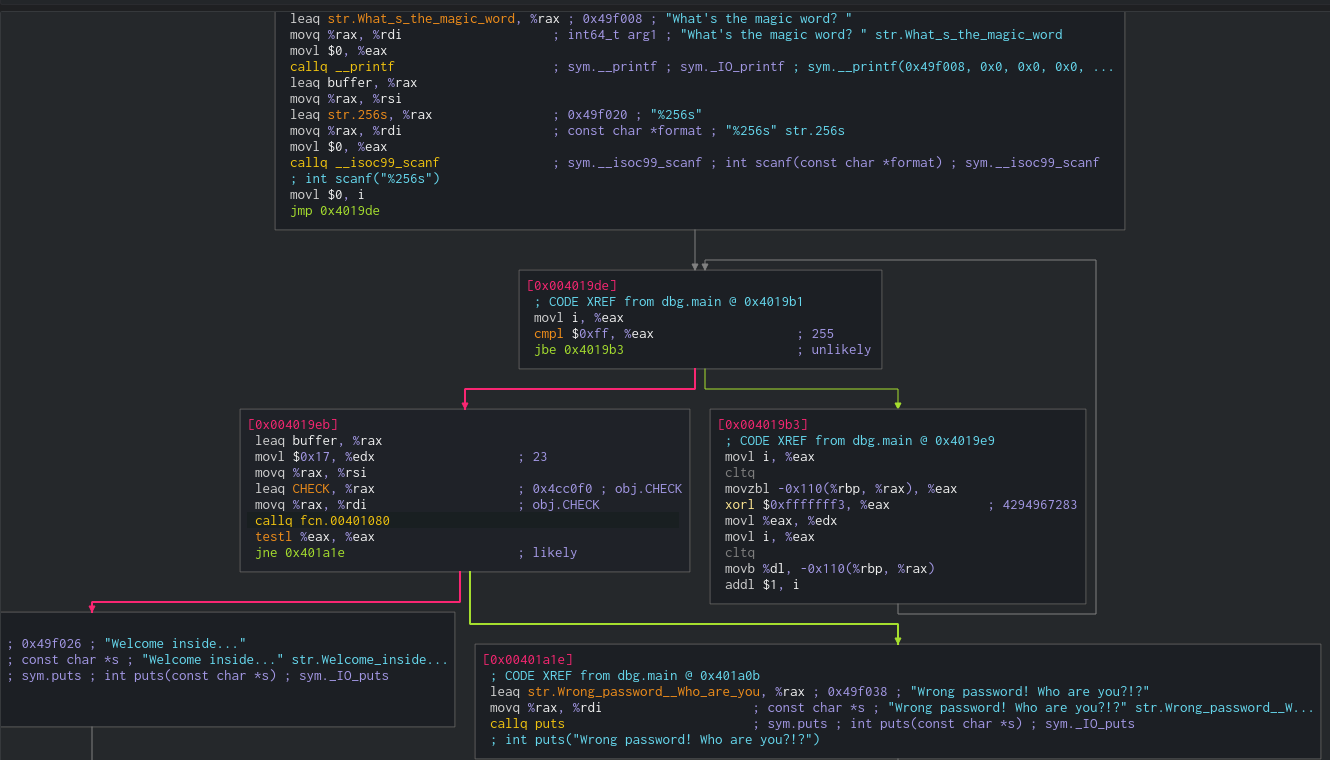 Checking the decompiled code with the ghidra plugin also allow to understand the behavior.

Now there two ways to solve this challenge and retrieve the flag.

The quick and easy way is to display the CHECK value while statically analysing the binary and xor it back with 0xf3.

The more difficult but elegant solution is to dynamically debug and interact with the binary.

First we launch the binary in debug mode and set two breakpoints:

Then we start the program and input a placeholder value that has the same size (23 bytes) as the flag.

Note: to find the size of the flag we just have read obj.CHECK, here I substract one to remove the size of the string terminator (0x00) and divide by two because it is printed in hexadecimal.

The we display the stack (rsp) and see that it contains the 23 A placeholder after an offset of 16 bytes (0x10).

So let's rewrite the stack and replace the placeholder by the xored flag:

The CHECK object seems read the flag from rsi.

So we just have to read the value of rsi after the check before the comparison and jump.

This method is more complex but would be handful if the obfuscation was harder than a XOR or if that obj.CHECK couldn't be read directly.

The command is received like that by the controller in challenge/controllers/MonitorController.php

The received command is used to build a model (challenge/models/MonitorModel.php)

On init the model MonitorModel wil call the function sanitize() that remove all whitespaces. The when the view is rendered the function getOutput() is called and will execute the system script santa_mon.sh where our command will be passed as argument.

But nothing prevent us to perform an RCE, we do not need whitespaces for that, for example we can chain the commands:

Looking in config/ups_manager.py we can see there is another web application running on localhost that is used to get the UPS status but this app has an interresting route for us: get_flag

For this challenge we do not have the source code.

We can register an account, log in, and see our pofile on read-only mode with the following message:

We have no way to contat the admin for now.

I used ctf-party to decode and re-encode our cookie trying to become an approved user.

It works, we now are able to modify our profile.

We can't upload a webshell even when modifying the extention + content type + adding the PNG magic bytes.

So let's upload some legit PNG files to find the upload path and see if the files are renamed after upload. Maybe our webshell was not removed even if we received an error for invalid files.

I uploaded two times the same image that was partially renamed:

So 5 random hexadecimal characters were prepended, we can bruteforce to see if our webshell is present on the web server or not.

I tried the about 1M possibilities but it seems invalid files are removed and there are too much possibilities to perform a race condition.

So I though about using the same technique as during ECSC 2019 Quals Team France: embedding a webshell in exif metadata:

We have a to face a MS word document including macro .docm.

We can extract the archive:

We can see word/vbaData.xml which describe the macros and the macro compiled as a binary itself word/vbaProject.bin.

We can decompile the macro with pcode2code.

The part of the code interesting us that we need to deobfuscate is the following.

Doing it manually gives us the flag.

By reading the routes source code at challenge/routes/index.js we understand most endpoints are retricted to user admin.

To try to become admin I tried some SQL truncation on the username at registration (VARCHAR(255)) but it didn't work.

There is a JWT token, and either by decoding it or reading the source code challenge/helpers/JWTHelper.js we see the data section contains a public key, which is unusual.

Having the public key corresponding to the private key used to sign the JWT token gave me the idea to tamper it and perform a key confusion attack to spoof the admin identity.

Using the tampered cookie I can authenticate as admin. We have access to more features but we still need to find a way to read a system file (/flag.txt as seen in Dockerfile).

I took a look at dependencies and saw nothing obvious so it's time to use tools.

With npm-check-updates I saw a few dependencies were outdated. So maybe one of them is vulnerable.

nunjucks is a templating engine so it's prone to RCE or LFI if it's vulnerable.

I check on Snyk vulnerability DB and found that this version was vulnerable to a prototype pollution attack: https://security.snyk.io/vuln/SNYK-JS-NUNJUCKS-1079083

Editing an elf name and replacing it's name by {{ 7*7 }} (/api/elf/edit), we can then see on the main page using the vulnerable card helper the number 49, proving the SSTI. So it's different from the prototype polution but it put us on the way to abuse the templating engine.

So let's find a valid RCE payload, I found one in a nuclei template: https://github.com/geeknik/the-nuclei-templates/blob/main/node-nunjucks-ssti.yaml